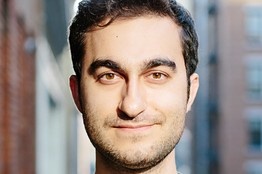 Radius Intelligence Inc., a startup that just got backing from Joe Lonsdale, co-founder of Palantir Technologies, via his firm Formation8 Partners, plans to use the new $13 million investment to amp up its fight for market share against a large publicly traded competitor, Dun & Bradstreet.

Both companies collect and analyze information on small businesses, a part of the market that’s of interest to lenders, insurers and service providers.

For Mr. Lonsdale, the investment is part of a strategy to invest in startups that take on big societal challenges. “In many cases, the industries we look for are ones that aren’t the usual focus in [Silicon Valley] — Radius fits that profile because it’s entering a market that most entrepreneurs don’t understand,” he wrote in an email.

Mr. Shirazi, a University of California at Berkeley dropout who was one of Facebook’s earliest and youngest employees, has spent three years building the software that Radius runs on before launching its service last year.

Using a software-as-a-service subscription model for its customers and its ability to gather new types of information on businesses, such as their online activities, Radius quickly gained customers including American Express–which owns a small stake in Radius–as well as Home Depot and publisher Gannett Co.

But it’s going after a market dominated by Dun & Bradstreet, a company founded in 1841. Dun & Bradstreet had $1.66 billion in 2012 revenue, and expected 2013 revenue to remain basically flat.

“D&B is a behemoth that was slow to respond to changes in the market, but it has gotten smarter,” said Peter Appert, senior research analyst at Piper Jaffray & Co., who has a neutral rating on D&B’s stock. He said that five years ago D&B owned practically 100% of the market for small-business information in the U.S., but some of that has been taken away by competitors like Experian.

Mr. Shirazi argues that Radius has more up-to-date and unique information, but most importantly the company provides analysis of business data that could help its customers eliminate armies of analysts, the CEO said.

Dun & Bradstreet says it hasn’t been sitting still. “We more than quadrupled our investment in data and analytics,” in the past couple of years, said Paul D. Ballew, senior vice president, chief data & analytics officer and chief economist at Dun & Bradstreet.

“We are leveraging social media data sets, we are leveraging unstructured data sets…We are doing everything they are doing, plus a whole lot more,” Mr. Ballew said. “Certainly, there are competitive pressures. We don’t take anybody lightly. We understand we have to improve our value to our customers, which is why we are aiming the investment at data and analytics.”

Mr. Lonsdale, who is joining the board of directors of Radius, expects the startup to not only overtake the market that Dun & Bradstreet serves, but to grow the market, getting more financial institutions and others to serve small businesses.

“We believe that Radius will end up being the authority on business information and business health,” Mr. Lonsdale wrote, adding that companies will use Radius to make decisions on marketing, credit and assessing risk when working with other companies.

Whether customers would really take up an offering from a startup, said Piper Jaffray’s Mr. Appert, depends on several things. “Breadth and depth of the data, accuracy of the data, and sophistication of analytics are all the competitive levers you can play on,” Mr. Appert said. He noted that many bank customers, for example, use a feed of D&B data that goes into their analytics, and that established process may be a barrier to entry for a newcomer.

Radius will use the new investment to hire a sales team. It recently brought on Tom Mills, formerly with Google, as vice president of sales. Radius now employs 36 in San Francisco and Austin and is hiring in both locations, Mr. Shirazi said.

The company is valued “somewhere south of $100 million,” said Mr. Shirazi. The CEO and early investor BlueRun Ventures also took part in the Series B financing, first reported by VentureWire.